yep i just hangs the player i am stuck there

you gotta give me a tutorial on how to make games like this, this is exactly the art style i would use

Really enjoyed this, thanks for making and sharing it :) I'm too dumb to get past floor 10 but that's on me hah.

This game is excellent, and now I kinda want to read all the signs and compile the information about this facility and the anomalies it contains on a document or webpage or something. I hope that's allowed.

Thank you! You're allowed to do so if you wish, of course.

Excellent use of lightning and loved the CB mechanic.

I really like this game it's simple but fun . Easy to play and has a nice fear factor to it as well.

Was a genuinely great game! The story, the setting, the visuals and the sounds just went together and made an absolute blast of a game! The concept and gameplay was simple and straight forward, and hence made the story that much better as there was a subtle concentration on that due to the simple game play. The scientific SCP/ Control type explanations given on the walls were both hilarious, intriguing and well done!

Glad you enjoyed it, thank you for the kind words!

Only a few words I can type here to accurately describe my feelings. I. NEED. MORE. Need more, longer, games from this dev. 10/10

Thanks so much, watching you being so excited while playing was awesome!

Honestly, what a solid and quick play. Clean.

Playing the game right now on floor 10, so far having tons of fun!
Edit: (Just finished it, shockingly good work for 10 days!)

Pros and cons are down below) Check out my vid here (the game is the 2d there, likes and subs are highly appreciated)):

1. That was something new! It had SCP containment breach vibes, of course, but the game was still original in every way possible! The mechanics (though simple) were rather appealing - the fact that the character had several lines for reporting using a walkie-talkie (or whatever it's called) for the same sighting is very cool! (especially enjoyed "oh f*ck" ones at the end))

2. I loved the story and the details in the facility. Enjoyed reading the notes on the walls and it's so nice that the game gave you just enough time to do that. The moment (and the note) with the cups was amazing! Such a cool little detail. Like, yeah, they have also escaped, but I have bigger problems over here.

3. I think the ending was cool. I think it was perfect. A little bit of irony always makes the story a bit spicier. I think that it wouldn't be as great if you'd finish it after the neutralization of the entity.

5. The game saved progress on each floor so even if the player woul'd die - they don't have to replay the whole game again.

1. Well, the hints at the walls don't really make sense as the entity kills almost immediately (as one can see upon failing the game). Who'd leave a note for the only other fighter so high on the wall in a dying state. I know that this is a bit nitpicky but that's what I thought when I saw these bloody notes on the wall. Maybe it would be better to let someone scream that before dying before the main character's eyes or something like that in order to keep the immersion.

2. I also didn't really like that we are constantly going down but the floor count is going up.

3. The entity can block the walkie-talkie signal but can't affect the elevator in any way? That was very weird. Maybe the game would benefit a lot from letting the character get stuck in the elevator at some point for a brief time (it would allow them to comment that and explain why the elevators are still going).

Amazing! 5/5 definitely. It's a pity I can't rate the game on jam as I don't have my own submissions, I would like to help you out so much! That was great. It's obvious how much effort was put into the game (in such a short time) and that you thought about the players a lot and made everything to create a comfortable experience. Great job! Can't wait for more games form you!)

Hope my feedback was useful!

Thank you so much for playing my little game and taking the time to write this detailed critique. I really appreciate the feedback and all the kind words, it's super nice!

Ok but floor 10 is confusing

Run away from the static... but to where?

Hello, the sound is spatialized, which means you need to listen closely to see whether the sound comes from the right or the left. I agree that this is not made very clear in the game.

Oh, that makes sense. I wasn't wearing headphones and was in a semi-noisy room, so that's probably why I couldn't tell.

Whoa! The atmosphere in this game is actually quite scary.  Especially during the chase scene. Love this game! Keep up the good work!

Reply
The HiveMind2 years ago(+2)

Epic game, I beat it! Love to see more games like this one!!!

Thanks for feedback ! Kinda stoped game-dev for now moving to the web-dev, i'm sorry i never replied to you.

Thanks for making this game Nerdspartan. The radio audio quality was stunning, the style was great, the creature scary. The story was fantastic and it somewhat reminded me of another game, I think you can expand this story. The announcements on the wall were also a nice touch. I would've liked to have a intro screen with the name of the game and your dev name and a clear instruction that you need to hold space bar to shoot, not just click it, but that´s it.  Nicely done!

Thank you for playing and for the nice words, Aniizul!

Thanks so much for the reply, I will keep an eye in your work. Very interested in playing more of your creations!

PLEASE TURN THIS INTO A FULL GAME

This is a full game.

if you get far enough down then a resonator bomb is detonated and you get cornered and then you have to shoot a skinny floating creature that floats toward you.

Greetings brother. This game has a very nice touch of horror. I really enjoyed playing this game.

Nice, thank you for the vid!

Nice game...no let me correct that. AWESOME GAME!!! this is well done and I loved its style I wouldn't mind another in a similar fashion to this as a continuation. please keep these coming you have talent. :D

Thank you Stylish-1, I appreciate your video!

it was a pleasure

i love this game

this game is real good, scary atmosphere, good lighting, horrifying enemies. This game is really good, but I got so creeped out by the dead team of SRT units that I pretty much closed the game.

Edit: was finally brave enough to go through floor 6, Team was dead, then lights went out and I randomly flew into the air and got choked to death. 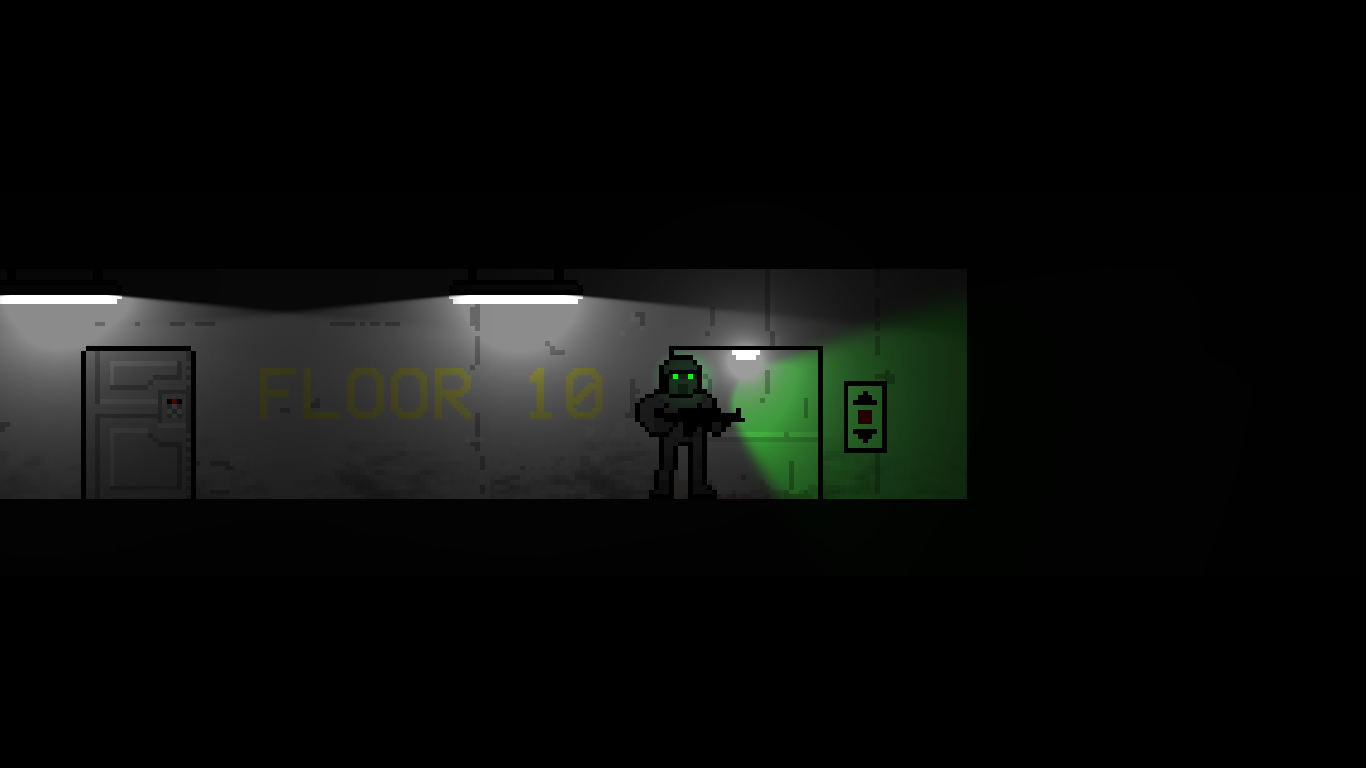 I only got to Floor #11 its hard but also easy but Great game.. it intreeged my skills of gun games then there for I love this game. I would like a secret ending or so..

I give great feedback because how great the graphics are and the blood 100% greatest scary indie game <3 Love your games Nerdspartan.

Im to scared to go on with this game even because im in P.E. class right now.

Plus what are the odds you get one chance to play a game like this in sometime while your in clss while your in P.E. in your room.

Thank you for the love!

Journal Entry #4 I made it to Floor 11, they killed my best friend Bob. He was a good friend, but now he's dead. Note to self, don't be like bob.

Anyways, funnies aside, I like it so far! I finished the game...and I have reached my verdict...

I love it! It's definitely got some awesome sound effects. Reminds me of a game I played when I used to play on roblox. Can't think of that game though it's been so long. The voice acting here was pretty neat also. Great job!

PS: Using the radio chatter codes is pretty neat. Reminds me of my last job where radios were required for daily operations.

Thank you, Ghost, I appreciate it, glad you liked it!

Wow im not sure how you completed it.

spooky and the graphics are cool

Reply
Niven Hedinger2 years ago
I enjoyed myself a lot while playing this game. I played it 3 times just for fun and recorded it. The whole vibe and the character is really impressive and this has a huge potential. Loved it!!! Keep up the good work!
Reply
Nerdspartan2 years ago

Super happy you enjoyed it! Thank you for the vid!

Who else realized that this has the same font as Among Us? Probably all of you

Game is like the "Hulk" from Resident Evil 2 remake side mission. He sounds like him anyways haha! There's even voice acting! The environment is great and it keeps you on your toes. Time to find out why all your co-workers are dead :P

Thank you, it was really fun to watch you play!

Reply
iwanPlays2 years ago(+1)
I can hardly understand a word yet I love the voice fx.

Awesome, your let's play was sick! Thank you so much for playing!